It is universally acknowledged that an athletic lifestyle, alongside routine exercise, can work wonders for health and increase life expectancy. Yet at the same time, few people realize how certain exercises can be incredibly taxing and potentially dangerous for the body as we age. Many people grow up consistently pumping iron at the gym, stacking up weight exercises on their arms, legs, chest, and core, but as our bodies age and joints and muscles become more vulnerable to strain, this can become untenable.

Slowing down the use of weights for older athletes doesn’t have to mean stopping from routine exercise, however. There are now endless ways to go about low-impact training, meaning that cutting down on the heaviest weight training doesn’t have to mean stopping going to the gym. From the calmer training and exercises of yoga and Pilates to the familiar reps and sets routine of resistance band training there’s no need for older athletes to slow down, but only adjust their usual training methods.

From Manchester United player Ryan Gigg’s appraisal of yoga, alongside that of American Football player Tom Brady, to fellow NFL star Arron Roger’s praise of resistance band training, more and more people are taking notice of the benefits of low-impact training for cultivating athletic longevity as we age. 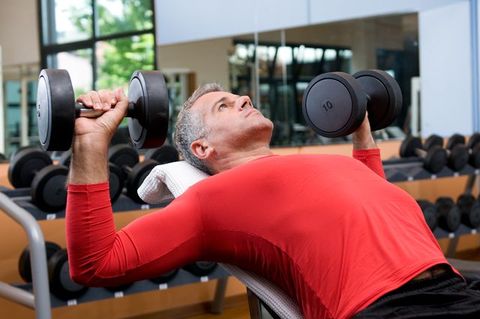 With a recent Harvard study finding that sedentary people over the age of 30 can lose around 3 to 5% of their muscle mass a decade, it’s clear that stopping exercising isn’t the right way to address aging, even though certain exercises might be more taxing. The muscle most commonly lost when aging is commonly referred to as ‘fast-twitch’ muscle, muscle specifically suited to pulling off the most sudden, powerful movements and extensions.

Actions like sprinting, jumping, throwing, and, perhaps most important for any avid gym-goer, lifting, all depend on these fast-twitch muscles. Not only does this muscle put power into the movement, but it also reacts quickly to stabilize you whilst you are performing it, preventing a stumble from becoming a fall. The loss of ‘fast-twitch’ muscle is part of the reason for older people’s increased susceptibility to dangerous falls.

Aging athletes may find it hard to counter muscle-mass loss with their familiar high impact training techniques, as these activities are riskier for those lacking the stability of younger people. There is however an answer for those who want to continue working on and maintaining their muscles even as they become too old for consistently pumping iron on the weight benches: low impact training.

Why work with resistance bands?

Working with resistance bands doesn’t mean you won’t be developing muscles, in fact, resistance band work has been shown to grow both the slow-twitch and fast-twitch muscle fibers, giving aging athletes a great return for their work. Because resistance band training works with a low load, it can also be a way for older newcomers to become acquainted with strength exercises.

Working quickly with resistance bands is a strong way for older athletes to maintain and build up fast-twitch muscle fibers without the potential dangers that come with swinging larger weights around whilst remaining balanced. On top of this, the versatility of resistance bands allows a session of exercises to work a large group of muscles all around the body, not only increasing strength but providing a boost to aerobic performance and flexibility, with many exercises and routines containing movements that mirror our everyday movements.

See Also: What Are The Most Popular Health Benefits Of Martial Arts For Kids?

The Benefits of Yoga and Pilates

Alongside strength building work with resistance bands, yoga and Pilates are being increasingly taken up by older athletes, including some of the biggest sporting names, as a means to extend their careers and keep their performance up.

Like resistance band training, both yoga and Pilates are low impact training methods, though there is always the option to use weights with them. Pilates particularly places a large emphasis on smaller movements that build up core strength and stability, as well as flexibility throughout the body. As an exercise regime, Pilates is a great way for older athletes to continue to improve and consolidate existing balance, helping to counteract any potential instability as a result of aging’s effects on the muscles.

The slow and carefully measured movements and breathing exercises of yoga are another avenue in which many aging athletes go down to maintain balance, flexibility, and strength, whilst also learning how to enter a relaxing headspace, bringing down stress in the process. Like Pilates, yoga’s cultivation of balance, alongside its encouragement of physical and mental stability, makes it the perfect exercise for older athletes looking to consolidate and develop their strength and balance.

The above article was contributed by Gary Rogers of Exercise Resistance Bands UK, who specializes in premium quality fitness equipment for the casual gym user and the more serious athlete.